I won’t dwell on the universal subject, except to say thank you for the massive vote of confidence and the brilliant feedback we have received these last few weeks. For the first time ever we are running out of quite a number of plants now and sales are running at five times the norm for August, down from seven times in May. 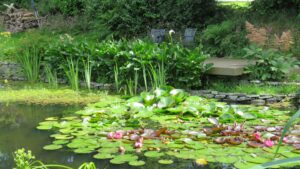 I do want to say a few words about shade and ponds, since this is a subject that I get asked about a lot. Many people read that shade is necessary in order to reduce problems with algae and blanket weed and misinterpret this to mean that ponds should be made in a shady spot. I challenge anybody to send me a picture of a shady woodland pond full of colourful flowering plants! The thing is, flowering plants almost all require at least some sunshine and those with the brightest and most colourful flowers like water lilies and water irises need as much sun as possible, so for best results ponds should be in an open sunny position. It is the pond plants themselves that should provide the shade on the open water, and this can be achieved in four main ways. 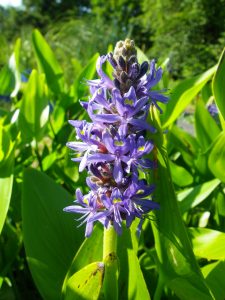 1) Plants that grow on the bottom but have floating leaves, such as water lilies, water hawthorn and water clover – these are your principal allies.
2) Plants that are free floating, such as frogbit and water soldiers. These can fill in spaces between plants in category 1.
3) Plants that have a rafting growth habit, such as bogbean, bog arum, water forget-me-not and brooklime, growing out from shallow water at the margins to cover areas of deeper water. Some, such as fringe lily, grow long runners and cover large areas quite quickly.
4) Tall marginal plants that cast shade, especially those with dense foliage, such as Lythrum and Pontederia.

You should aim to have at least 50% of the surface shaded in this way, even more for very small or shallow ponds.

The main area of difficulty, especially with a new pond, is that most of these plants don’t really get going until well into the summer, whereas the dratted algae tends to start in early Spring. It’s necessary in most cases to resign yourself to a degree of algae in the first year, but if you have a well designed and planted pond you should find that from year 2 onwards the problem is much reduced. Good maintenance is also most important, this means cutting back your plants and removing debris in autumn so that there is not too much organic matter in the bottom of the pond, leading to elevated nutrient levels in Spring which feed the algal bloom. There’s a bit more detail on my Information pages about blanket weed and plenty more besides.

We are already planning for next season and expect to make few major changes, “if it ain’t broke, don’t fix it”, but we will be discontinuing a few of the slow selling varieties of moisture loving plants. We have a large area of the nursery taken up by a lot of plants that few people buy, and desperately need the space for the ones that we sell in thousands. There may be some bargains to be had, so if you have a large damp area to plant, please bend my ear!

Let’s all hope for a less fraught season next year.